Traditional fire sprinklers are basic in their operation - they drench a much larger area than the fire and so require a lot of water. This creates installation headaches and leaves properties with serious water damage if the system is ever used. Automist Smartscan® changes that. Smartscan® has the same low water consumption you expect from other Automist® fire protection products, while actively targeting the fire to give the same fire performance as a full sprinkler system. It's the best home fire suppression system available.

Until recently, Automist was an expensive option in larger installations because a pump was required for every spray head. Automist Smartscan Hydra® eliminates that problem, allowing one pump to serve up to six heads. That makes Automist cost-effective even in larger apartments and houses, student housing, and other multi-residential properties. Even with six heads installed, Smartscan Hydra provides BS8458 fire performance using only 5.6 l/min. With multi-head comes a two-stage activation process that makes false activations almost impossible. Even better, unlike conventional sprinklers, the system is drained after testing, so there's no scope for leaks in walls or ceilings when the system is on standby. 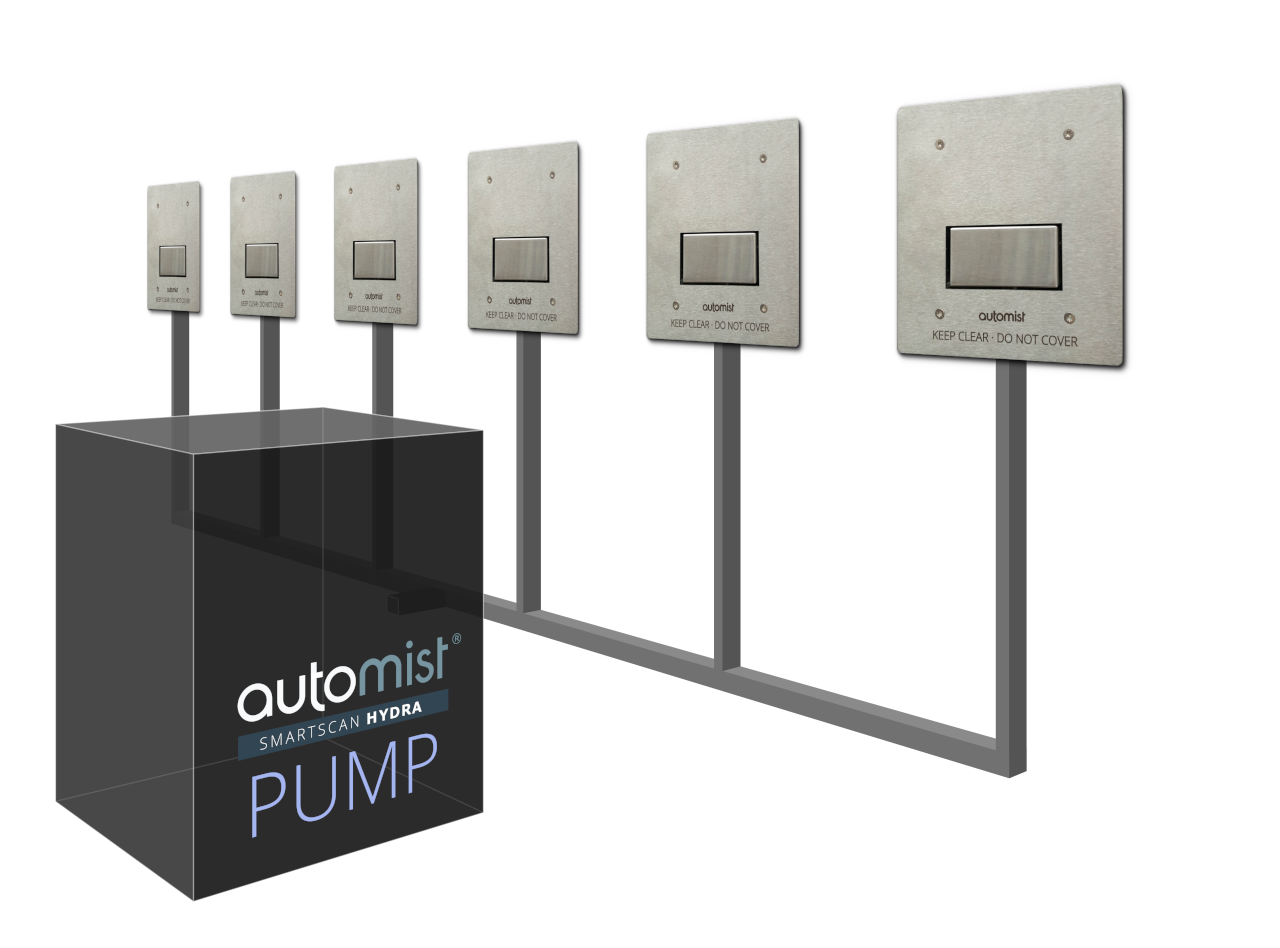 Automist Smartscan® allows rapid approval by any local authority building control in England, Wales or Scotland, thanks to its Registered Detail EWS534.

Most properties can install Hydra at a much lower cost than the original Automist Smartscan. Even in a single room that needs two spray heads, Smartscan Hydra gives a substantial cost reduction, but in in flats and four-storey houses where coverage is required throughout, the installed cost is reduced by more than half!

No other UK domestic watermist system has been certified by BSi to perform equivalently to BS8458. This depth of testing and certification means that you, and your project's approver, can be confident that Automist Smartscan® will do its job. Test data for Automist Smartscan is also available showing that it performs just as well as conventional sprinklers.

Smartscan Hydra® is almost impossible to activate unless a dangerous fire is present, thanks to its two-stage activation process. The system only activates when two completely independent sensors agree that there's a fire. Even better, Automist is drained of water after testing, so there's virtually no scope for leaks within walls and ceilings.

A room of up to 8.5m x 5m can often be served by a single Smartscan® wall head. We challenge you to find a more elegant-looking solution for high-end architectural spaces.

In the event of a fire large enough to trigger your fire suppression system, you'll have some damage. But an Automist Smartscan® unit will never spray more than 170 litres of water during an activation, and can be easily stopped. A BS9251 sprinkler system will normally cause major flood damage: 2 tons of water gushing through your home every half hour.

The wall-mounted position and smaller number of spray heads make Automist Smartscan® eminently suitable for retrofit and refurbishment situations. In addition, the much lower water consumption (typically 10x less than BS9251 sprinklers) means you won't need to find space for a tank or upgrade your water supply.

Example of an open plan living area – Photo by D+FORM

How does Automist Smartscan Hydra® work?

Spray heads sweep back and forth across their field of view looking for a dangerous fire. Domestic heating and fireplaces are ignored. If a fire is sensed, the head with best view activates while others are parked.

If a fire is confirmed, the pump activates and the active head suppresses the fire with targeted watermist.

While the Automist® “fixed nozzle” system blankets the whole room with mist, the Automist Smartscan® line introduces targeting, greatly upgrading fire performance. Starting from the new Smartscan Hydra®, activation is a two-stage process. First a combined heat/smoke detector (which is extremely resistant to false alarms) must sense a possible fire. Multiple relevant Smartscan® spray heads will then sweep the room, each using an infrared pyrometer to locate the angle at which it can “see” the highest average temperature. Domestic heaters, fireplaces and log burners are ignored. In the event that no dangerous fire is identified by the Smartscan Hydra system, the fire suppression will not activate.

The fire is typically located in 6 to 12 seconds, but if the flames appear compact, distant, or partially obscured, the scan could continue for longer. If a dangerous/growing fire is confirmed, the head with the clearest view will aim at the fire while other heads are parked and shut off. The pump will then activate, driving high-pressure water mist through the chosen nozzle and shooting a “blade” of water mist directionally into the fire. The fire is then brought under control and normally extinguished. If residents are present, the system can be easily switched off with a STOP button once the fire has been controlled.

For the property owner, the choice of Automist® 'Fixed' or Automist Smartscan® depends on what you hope to achieve. Smartscan® is much more capable, and its equivalence to sprinklers confers a much greater range of design freedoms (the same freedoms as other types of residential fire sprinkler).

The Automist® fixed nozzle system is not equivalent to sprinklers and is intended for use in the particular layout of a loft-converted house, as recommended in Approved Document B.

Book your installation with Intelligent Mist

With hundreds of Automist® systems installed, there's a good chance that we've seen a situation like yours before. We'd be delighted to talk to you about how Automist® could work with your project. Give us a call today, or send project details through our contact form.