How to protect your flat from fires in a cladded building…

After the June 2017 Grenfell fire disaster, the perils of cladding have never been so apparent. That’s not to say cladding should be immediately stripped from your walls if it is on your property. It can help to protect the wall beneath from the elements, as well as add an aesthetic appeal to a building. It can also help to maximise the thermal performance of a property if it has been installed well and is high-quality.

That all being said, questions have certainly arisen over the fire safety of cladding after the devastation caused at Grenfell Tower. In this particular instance, common Aluminium Composite Material (ACM) panels were used, added to the exterior of 120 homes across 24 floors in 2016. These are a popular product in the refurbishment industry. It was added to help insulate the Grenfell building, as well as improve its appearance for the surrounding area.

Aluminium Composite Material (ACM) panels were used on Grenfell Tower, added to the exterior of 120 homes across 24 floors in 2016.

How cladding causes fires to escalate…

Sadly, the cladding at Grenfell Tower acted like a chimney for the flames, causing them to spread upwards rapidly, gaining momentum in the gaps between the building walls and cladding. The chimney effect is a concern with all cladding types, however in some buildings the cladding itself can be flammable. Aluminium can burn, but rarely does so as this requires temperatures of around 2,500°C. ACM is a cheaper type of panel compared with straight aluminium, consisting of a plastic core sandwiched between aluminium sheets. ACM will delaminate in a fire, with the plastic core melting, dripping and burning. Accentuated by the chimney effect, a rapid fire spread can result.

As we have seen, the cladding can pose a fire risk. A fire that might otherwise have stayed in one corner of a building can burn brighter and spread faster. Before long, it can take on a life of its own. In the case of Grenfell Tower, between 400-600 residents became at risk on the night of June 14th as a small fire that began on a lower floor rapidly consumed the building. At least 71 people died. It’s yet to be determined whether the cladding actually met with the building regulations, despite being signed off. It is thought that there could be another 30,000 buildings in the UK with similar cladding to the type used at Grenfell Tower in London. 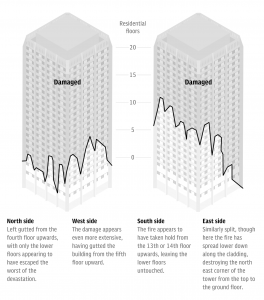 Fire safety in flats can be a key concern for many, especially given the media coverage of many significant disasters, from Grenfell Tower to Dubai’s 1,100ft Torch Tower, which was engulfed in flames for the second time in August 2017.

While those living in flats will experience more fires compared with those living in houses, it should be noted that it is no more dangerous to have a fire in a flat than it is in a house. Very few people die as a result of a fire that has occurred in a neighbour’s flat or common areas. This is thanks largely to the safety features that the building regulations require in flats.

Certainly, there are some risks associated with high-rise living that aren’t present in more typical homes. For example, large numbers of people may need to use a shared staircase, and a building-wide emergency can affect a large number of homes. It can also be harder to notify everyone to the emergency and ensure all occupants are prepared to evacuate.

However, aside from in a few rare instances, if a fire death does occur, it is nearly always in the flat where the fire began. The most significant fire risks for people living in flats are social and lifestyle factors, as well as advanced age. The type of dwelling is actually less of a risk in comparison. Safety measures, such as Automist® Smartscan®, can be introduced to reduce risks.

While many may worry that it is harder for people living in high-rise buildings to escape, especially if the escape routes are limited or people are residing in unsuitable flats (such as elderly people or young babies living on upper levels), research shows that more fires occur on the ground floor than on higher floors, and there is no evidence that those living on higher levels are at greater risk of being trapped by fires than those living in the lower parts. 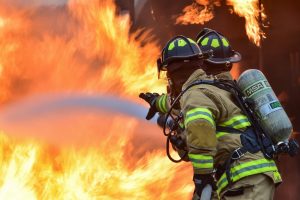 A fire prevention plan can be the difference between losing all your belongings, property and potentially even your life.

Whether you live in a house or flat, with or without cladding, thinking through fire safety in your home can be the difference between staying safe versus losing all your belongings, property and potentially, even your life. You should regularly scan your home for obvious risks, such as candles burning close to soft furnishings or electric fires near curtains. Make sure you have working smoke alarms and test them weekly. A carbon monoxide alarm also make sense, especially if you have an older heating system. Make sure you and your family know how to get out of your property, should a fire break out.

You may also explore the option of getting a fire extinguisher or fire blanket in your kitchen, or near any appliances that pose a potential fire risk. However, these rely on you being in your property at the time of an emergency and being able to use them.

One other avenue to consider is the inclusion of an automatic fire suppression system in your property. This can be done during an initial build, at the point of renovation, or as a retrofit application using Automist® Smartscan®. It acts as a fire sprinkler, providing targeted water mist at the point of any flames within seconds of them being identified. Using smart scan technology, this cutting-edge device acts as a firefighting system for building safety and for those living in it too. Although it can seem like a significant investment, the peace of mind – plus fire safety and prevention – that the Automist® fire suppression system can bring is often invaluable. It’s also cheaper to retrofit install than traditional water sprinklers.

The Automist® firefighting system can help to protect you and your property, and can also stop the spread of flames from reaching external walls and cladding. This is especially important in high-rise buildings and can help give you enough time to raise the alarm, as well as protect your neighbours from any potential fire risks.

While there is a lot of anxiety over the fire risk of cladding on flats, the government issued warnings in July 2017 that stripping suspect cladding from buildings could potentially put residents and the buildings at an increased risk of fire. This is due to the integrity of the cladding system being worsened during the changes, with material exposed that could accelerate external fire spread.

For those looking at the fire safety of cladding, it is important to seek professional guidance, for example from RICS, the global professional body for enforcing and promoting international standards in the development of buildings. This may include getting a fire risk assessment conducted by a suitably qualified assessor for the entire property to assess any key areas of concern, as well as the materials used. A holistic approach should be taken, considering the likelihood of any external fire spread occurring, and also looking at what fire safety measures are in place (e.g. water sprinklers). Samples of the cladding should also be tested to verify their fire safety and whether there are any deficiencies.

Ultimately, for residents or landlords, the most important thing to do in the meantime is ensuring that a fire prevention plan is in place and measures can be taken to protect both belongings and life in the event of an emergency.

For more information about Automist® Smartscan®, get in touch with Intelligent Mist now on 01206 544 223. With offices in London, Brighton and Colchester, we are one of the leading experts in the South-East of England for installing this cutting-edge firefighting system within residential buildings. Contact us today.